Hello Indie Hackers, I'm Daniel and I've been building ktool.io on the side for 6 months. I just reached $3,000 LTD sales and currently at a modest $24 MRR. Here is everything I learned building and growing KTool.

I'll try to answer the questions that I often get asked

1. What is your product?

KTool is a browser extension that allow you to quickly send web articles, Twitter threads and newsletters to your Kindle.

UPDATE: you can send an Indie Hacker post to your Kindle. It looks something like this :D 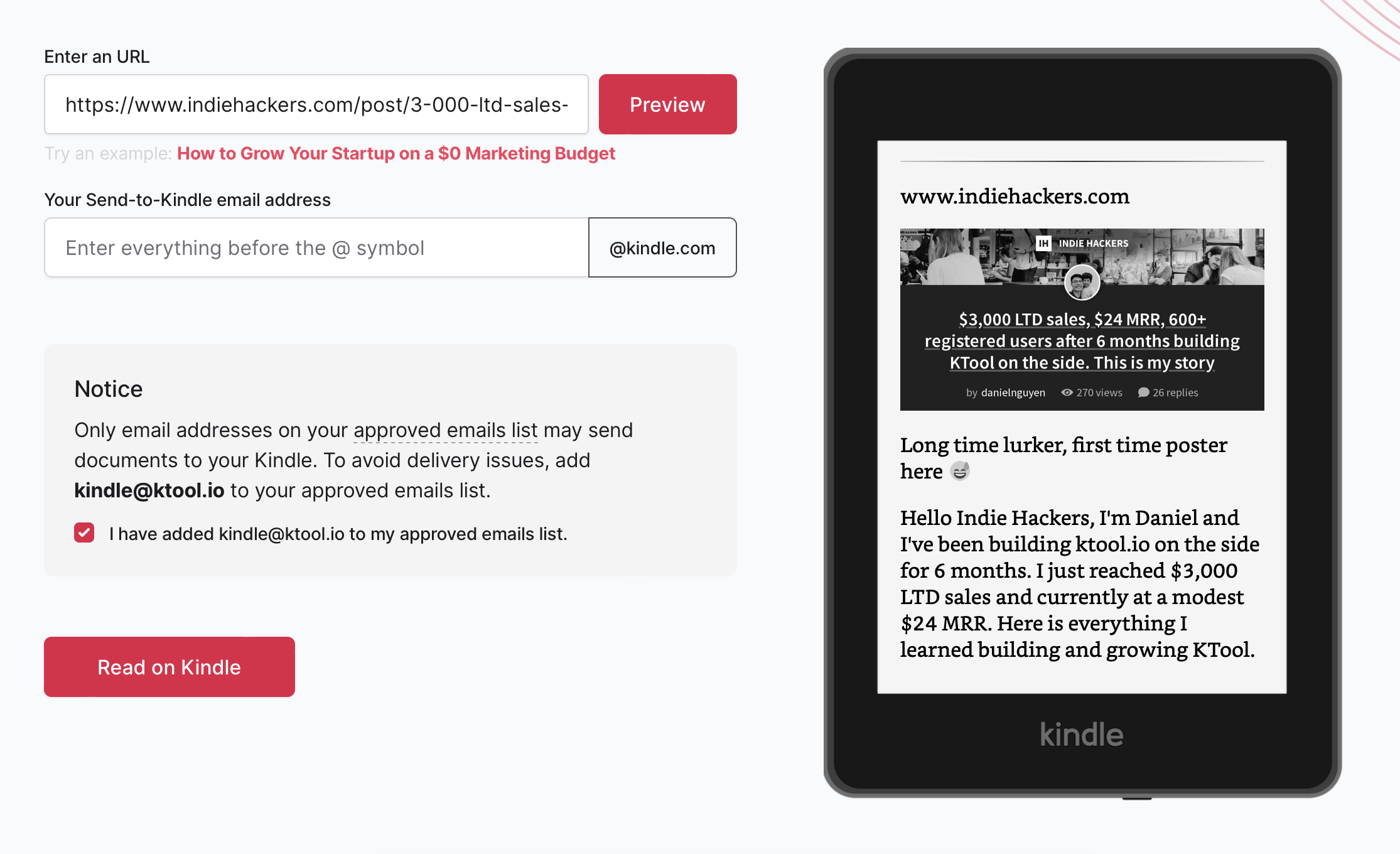 I didn't. Amazon supports this functionality for years but it recently stopped the development. Many users were frustrated and I was among them.

I saw the opportunity and decided to build a better version of it.

My first idea was to send non-DRM ebooks, not just web articles. To "validate" it, I talked to people on Reddit and Twitter. Some people found it useful and so I started building it in public.

I shared my thought here : 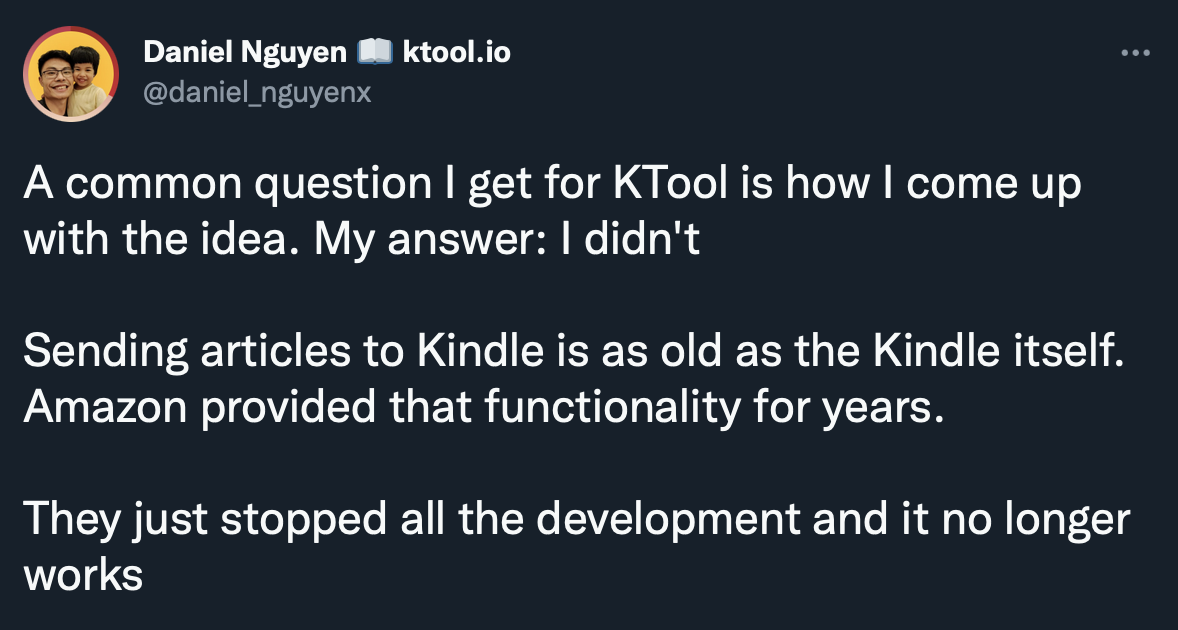 Key takeaway: Validation is important. Even if you're building a product that is already on the market, do talk to potential customers to learn why would they use your product.

3. What is your tech stack?

I use NextJS + TailwindCSS on the front-end and FeathersJS + PostgreSQL on the back-end.

Infrastructure wise: I use Cloudflare Pages for front-end, Heroku for API servers, Render for PostgreSQL hosting & SendGrid for email handling.

The web extension is a mix of TailwindCSS, Typescript and Swift. It was a fork of this boilerplate.

This stack is not sexy or whatever, but I've been working with these exact stack for 5 years. I even developed a custom auth solution on top of FeathersJS auth. Would be much faster for me to reuse the code.

Key takeaway: Use the stack you're most familiar with. It's fine to build a side project to learn new tech. But in my experience, learning new techs while building a side business usually increase your time-to-market.

4. How did you find your first customers?

I posted my crappy MVP on Twitter and got some initial positive feedback.

I keep improving the product until one day I got super lucky. Someone mentioned KTool on Hacker News: 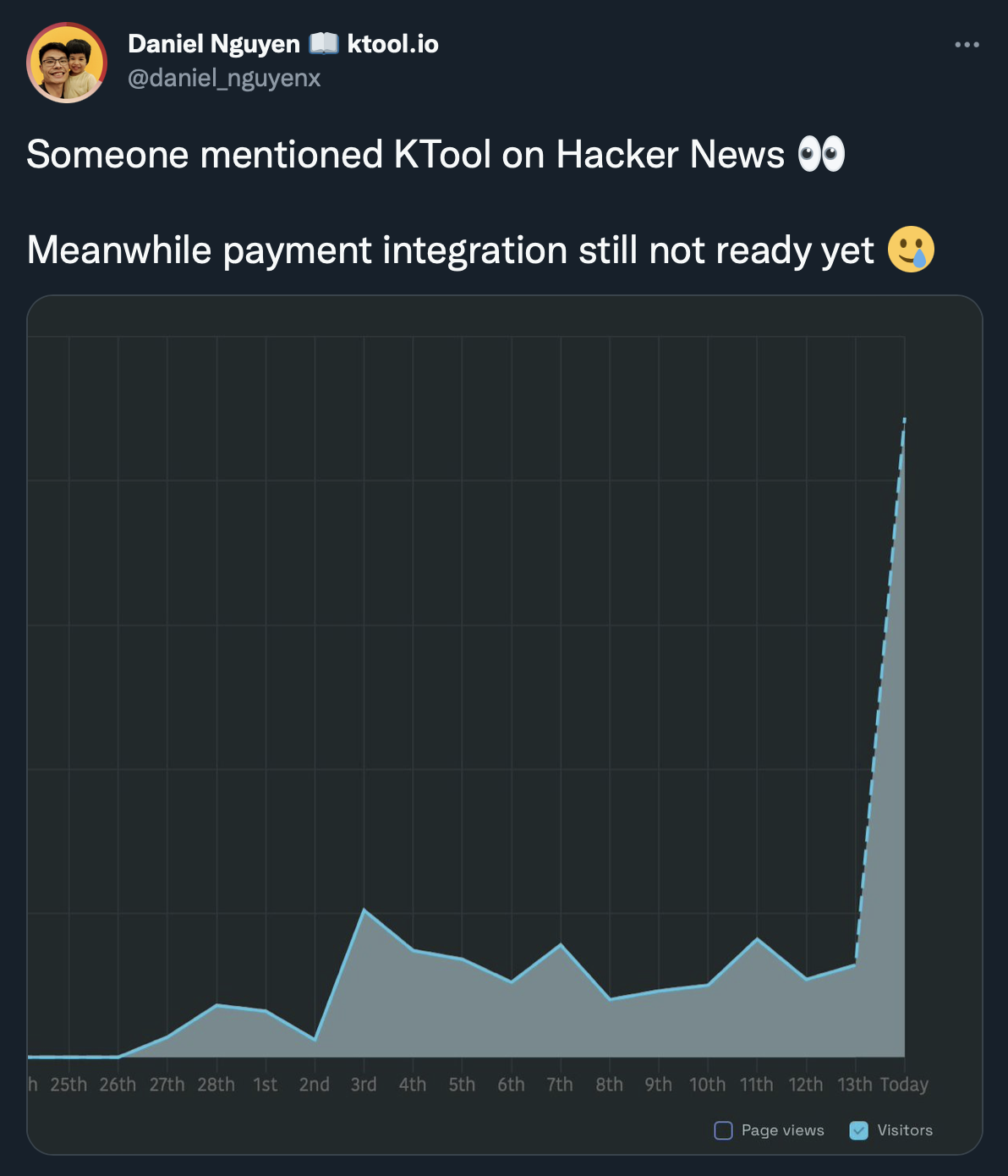 And I got a couple of sales that day, completely from strangers on the Internet :D

Fun fact: I haven't implemented payment integration when the tweet went viral. It showed the doge instead. People find it hilarious.

Key takeaway: Be consistent and don't stop tweeting about your product. With a little bit of luck, your first customers will come.

5. How are you finding your customers today?

I continue to build in public on Twitter. I'm super lucky as I got a lot of support from Twitter. KTool was mentioned by some big accounts: Tony Dinh, Simon Hoiberg, Dagobert and Arvid Kahl (guys, thanks for your supports 🙌)

In my experience, memes are fun but not a good strategy to grow your Twitter account. I do it mostly for fun.

Promoting KTool on big accounts works great though. I even got a sales 10 minutes after posting one such self-promote tweet.

Twitter was my main acquisition channel but recently, word of mouth is taking over. I'm happy that I don't have to spend too much time on Twitter like before.

Key takeaway: try to nail one channel before jumping to another. By focusing on Twitter, I got social proof built-in. People see my build in public journey and it builds trust. Also, don't afraid of self-promoting your product

6. How did you come up with your price?

This is where I'm still struggling. I'm going to do a lot more experiments to test.

First, I set a number that I feel fair for me as a founder ($49 lifetime deal, for super early adopters).

Then I research other products and learned that a B2C product like KTool usually priced at $29-$99 per year.

I increased the price to $89. Then sales were flatlining. I did a survey to learn customers' Willingness to Pay.

I write a thread about the experiment here

7. What you've learned the most?

This is my first time building in public on Twitter. Learned a lot about building a good Twitter presence, what is build in public and how to do it effectively.

I got the exposure I never could imagine. Over the last 3 months, my tweets earned about 2.7M impressions :D

Key takeaway: Twitter is wonderful if you know how to do it right. Also having a supportive community is super important. I'm grateful to receive so many support from the community 🙏

8. What was your biggest mistake?

Not spending more time finding a good name. I learned a little late that KTool was associated with a scammer. I plan to rebrand KTool soon :D 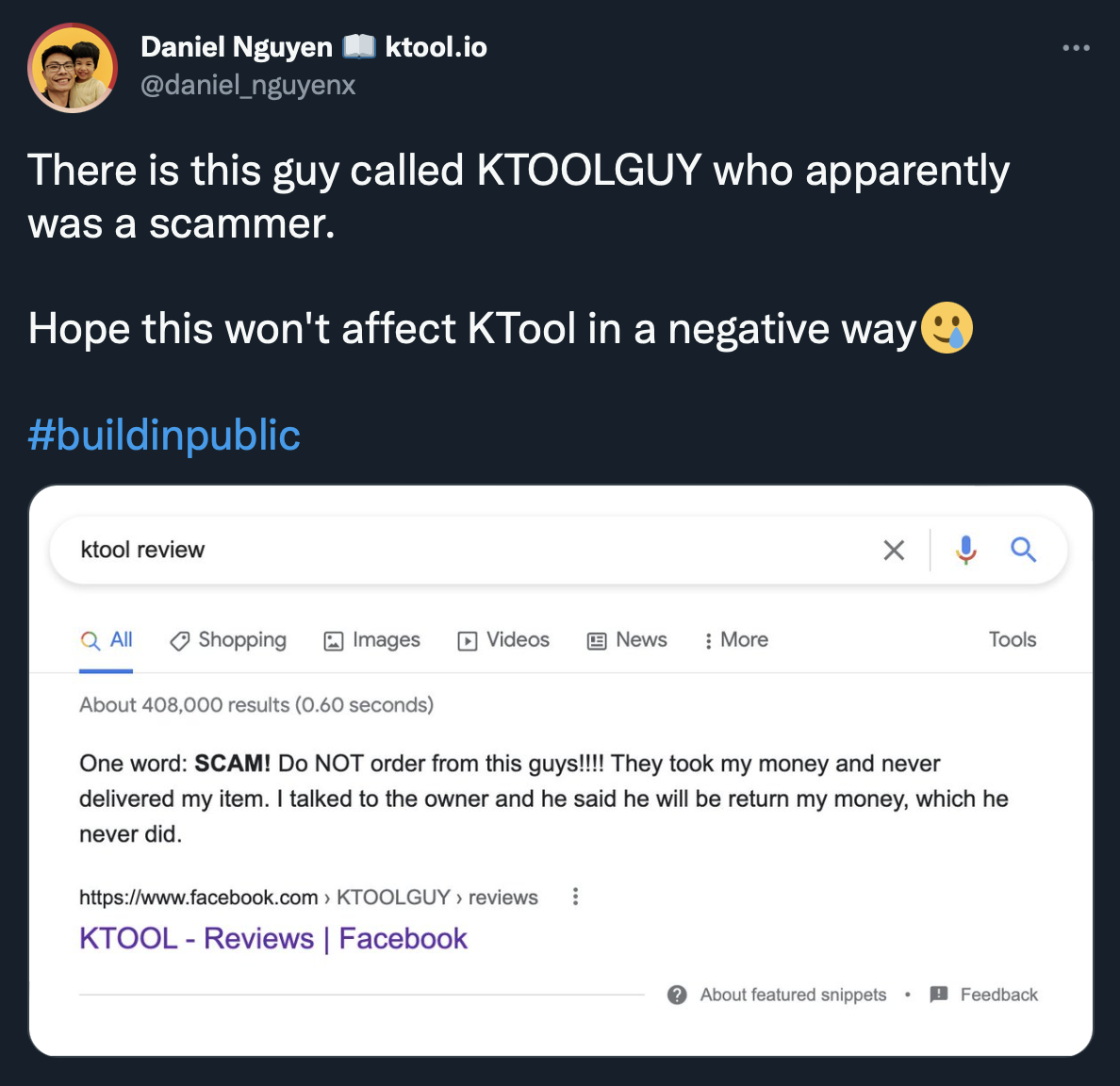 Also I should've charged earlier. The doge dialog experiment was fun though!

Key takeaway: you will make mistakes. Learn from it and improve in the future. I was disappointed at this for a while and it wasn't good.

This is my first time posting on Indie Hackers and I hope you find these learnings useful.

If you have any questions, feel free to leave it below. I'll try my best to answer ❤️

I failed 5 startups, what next? 37 comments Users want to use social logins 34 comments

Do you have a blog for your business? If not yet, why? 28 comments

26 actionable marketing tasks you can do right now 14 comments