These were the headlines that dominated mainstream media for both Black Friday and Cyber Monday.

There's a slight issue with this news: its source

These conclusions are based on data from Adobe Analytics, which "analyzes more than 1 trillion visits to retailer websites."

Let's dig a little deeper: Adobe Analytics is currently used by 109k websites, according to BuiltWith. 8.27 percent of these websites are among the world's top 10,000 most popular sites: 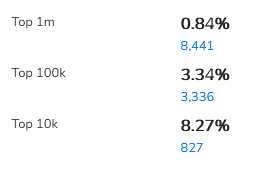 Furthermore, if you visit the Adobe Analytics official website, you'll notice a button to "Request a demo" (read: speak with a salesperson), which, combined with the stat above, indicates one thing:

Adobe Analytics is a tool mostly used by large corporations.

With this in mind, a more accurate interpretation of the mainstream news data would be: Online sales fell for the first time on mostly large/enterprisey online stores.

This did not appear to be the case for Shopify or Amazon, both of which have a large percentage of smaller sellers.

What Facebook Marketplace, Amazon and Shopify have in common: When compared to the sites in Adobe's data, they have a much higher percentage of smaller creators:

Based on this data, we can safely assume that on Black Friday and Cyber Monday, people preferred to buy from smaller creators rather than big brands.

The whole picture is not so straightforward, however.

According to Adobe, one of the primary reasons for this year's "lower online sales" is people's preference to shop earlier:

So far, from Nov. 1 through Cyber Monday, consumers in the United States have spent $109.8 billion online, which is up 11.9% year over year, Adobe said.

It makes sense: Due to supply shortages, people go and buy an item earlier. So if you have a child and want to get them an Xbox for Black Friday, it's probably a good idea to try and get it earlier.

Unfortunately, there is no information available from Shopify/Amazon on whether this increase occurred on their platforms as well.

What does this mean for you as a founder?

First and foremost, be wary of headlines like the ones at the top of this post.
They may lead you to the incorrect conclusion that "Black Friday and Cyber Monday are dead."

Who here is competing with big guys? 73 comments

Gave up 300K/yr as a blockchain dev to make a pomodoro timer 🤔 AMA! 65 comments Want to sell 💸 your SAAS/side-project? 22 comments What is your secret growth strategy? 12 comments ⚡ How we’ve marketed our SaaS on a tight budget 11 comments